Achieve what has not yet been achieved 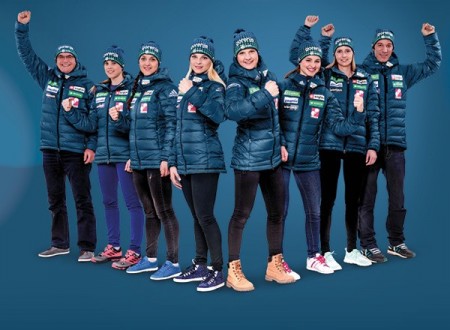 From the podium in Ljubno to the Olympics

Every season is special. However, this season is especially thrilling both for our ski jumpers and their coaches. Shortly after the conclusion of the ski jumping competition in Ljubno, the best female ski jumpers will jump on a plane to South Korea, which will hold the winter Olympic Games at the end of February 2018. Since our ski jumpers also want to participate, their trainings for this season have been even more intense than usual, as they enter the new season full of expectations, enthusiasm, and optimism. With successful performances at World Cup events, especially at the home event in Ljubno, the Slovenian eagles want to show why they deserve to get a chance to prove themselves in South Korea.

The summer Grand Prix events came to an end in the middle of September 2017 in Chaikovsky, Russia. The girls achieved top results at all the events and showed themselves as a strong team. Špela Rogelj, Ema Klinec, and Urša Bogataj achieved several top 10 and top 15 results, while the best result was achieved by Maja Vtič, who placed 3rd in Chaikovsky, Russia. In the final Summer Grand Prix rankings, Špela Rogelj ranked 8th and Maja Vtič 9th, whereas in the Nations Cup the Slovenian girls ranked 2nd.

The girls, as well as their coaches, are hoping to continue their success story in the winter season, which they want to begin with excellent results at World Cup competitions. They want to raise the Slovenian flag above the podium on more than one occasion and show to the international auditorium that not only are Slovenian guys among the world's ski jumping elite, but also Slovenian girls. Their coach Stane Baloh sees this as one of the most important characteristics of the future success of women's ski jumping. "The foundations have been set a couple of years back; later on, women's ski jumping became an Olympic discipline. Now we are working toward female ski jumpers becoming equal to their fellow male athletes." By recognising the quality of Slovenian female ski jumpers on an international scale, Stane Baloh relies on the growing support and investment in women's ski jumping in Slovenia. His goal for the coming years is to expand the junior national team, where younger girls would continue to improve, since interest for this sport among them is increasing rapidly.

We have our "Devilish Slovenians" to thank for that. With their achievements in the previous seasons they affirmed their status as top athletes and most definitely inspired the future generation of Slovenian female ski jumpers. They want to achieve excellent results not only for themselves, but also for all their loyal fans, who will surely come to Ljubno in large numbers once again. The National Olympic Committee of Slovenia recognises the Ljubno event as one of the most spectacular ones in the FIS Ski Jumping World Cup Ladies season. The girls also attribute great significance to the home event. Every year, they look forward to competing in front of a large home crowd, which gives them additional motivation. Two years ago, two places on the podium were taken by Slovenian jumpers – an achievement they want to repeat this year. Achieving such a result in front of the home crowd is especially heart-warming, say the girls.

Successful results in Ljubno will also give them wings to jump further in South Korea. The biggest wish of every competitor and their coach is to first qualify for the Olympic Games, and once there, achieve new podium positions. This is the goal that the girls have set for themselves, and although it is not modest, the girls continue to prove that they deserve to be called the elite. Coach Stane Baloh says their wish is quite simple: "To achieve everything that has not yet been achieved."