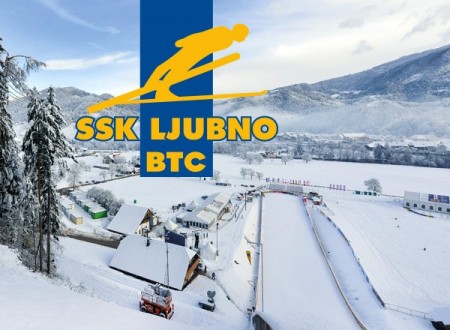 The year 1931 has a special place in the history of Ljubno. As soon as the first skis and bindings arrived in Ljubno, a competition was organised in which the most daring skiers also competed in ski jumping. However, the true turnaround in the winter sport activity of Ljubno came with inspiration from Planica. After paying a visit to the biggest Slovenian ski jump, a group of Ljubno locals decided that the Upper Savinja Valley would also soon be able to host those who wanted to jump down into the valley on their skis. Following the construction of the Planica ski jump, Stanko Bloudek thus tackled another challenge – the 60 m Ljubno ski jump, which he completed in 1953 with the help of numerous locals. In the same year, Ljubno already welcomed the first competitors who took to the newest Slovenian ski jump.

After two decades of active ski jumping, the ski jumpers of Ljubno founded their own club, which has been operational in its present form since 1973. The foundation of the club raised awareness of the fact that its youngest members would also need proper training, so they got their first 18 m ski jump. The coming decades saw the implementation of many new features, which considerably improved Ljubno's training capacities. Besides covering some ski jumps with a plastic mass, which enabled ski jumping throughout the entire year, they also enlarged their biggest ski jump. The most daring change came in 2005, when the club decided on a reconstruction of the big ski jump in accordance with FIS criteria – this is the very decision that firmly established Ljubno as a World Cup race venue and brought the world ski jumping elite to the small village in the Upper Savinja Valley.

Besides the excellent infrastructure and the passionate and hardworking locals, credit for the outstanding organisation of the annual FIS competition in Ljubno goes to the dedicated management of SSK Ljubno BTC, whose vision facilitates the advancement of this sport in Slovenia. One of its members is Rajko Pintar, general secretary of the club, president of the Organising Committee of the Ljubno World Cup competition in women's ski jumping since 2012, and board member at the Ski Association of Slovenia. Having also been the head teacher of the Ljubno primary school for 27 years, he is no stranger to raising young generations. He makes good use of his knowledge to further develop ski jumping and makes sure that the club pays enough attention to raising future top-level athletes.

How many members does your club have?

SSK Ljubno currently has more than 100 members, 38 of whom are active ski jumpers, both male and female.

Are you already raising the future generation of Olympic ski jumpers?

The future generation of ski jumpers receives our great and constant care. The club enrols children of six or seven years of age and above. Because of the great success of Slovenian ski jumpers, including ski jumpers from Ljubno, the interest in the club increases on a yearly basis, to the point that it is sometimes difficult to provide all the necessary equipment or enough coaching staff.

Is this sport becoming increasingly attractive for girls since women's ski jumping became an Olympic discipline?

Of course. The goal of every sport is to become an Olympic discipline, and the aim of every athlete is to compete in the Olympics. Of course, all young athletes are well aware of it, including girls.

What changes have you noticed since women's ski jumping became an Olympic discipline?

Women's ski jumping is the fastest growing winter sport in the world. There has also been an exceptional change in women's ski jumping technique in a very short amount of time, so women's technique is already very close to men's. Women are not lagging behind men in terms of distance either. Of course, the foremost contributing factor of this development is the inclusion of the sport in the World Championships, the World Cup and, finally, the Olympic Games.

What is the role of the club within the community of Ljubno?

Ljubno has been home to ski jumping for much longer than half a century. There is barely a house in Ljubno that has never cooperated with the club in some way, be it in terms of organisation or ski jumping itself. This is especially evident during the organisation of large competitions, when every resident of Ljubno helps out in some way.

Does the club have any advantages due to being located in a place with such rich history of ski jumping?

There are many advantages, indeed. But most importantly, those who carry the greatest amount of responsibility in the club can always rely on help from the entire town and will never be let down. This makes work in the club much easier.

What are some of the plans for the club's future?

The club is currently firmly established as one of the top three clubs in Slovenia and this is where it must stay. We are convinced that we will have even more athletes in the national team who will compete at the biggest world competitions and bring home medals. In terms of organisation, we need to further raise the level of quality of World Cup races every year. We also aim to become an organiser of Grand Prix races in the summer time.

What changes are you noticing in the discipline today compared to the past?

In Ljubno, women's ski jumping was born with success attained on a worldwide scale and it is not for nought that Ljubno is considered the cradle of women's ski jumping. At the same time, we are happy to call it "the women's Planica", as confirmed by an exceptionally high number of visitors. That is how fast development is happening.

What are you most proud of?

I am most proud of the journey we have undertaken and of the fact that we have never failed to have a vision or the courage to realise our plans.

What would the club wish the ski jumpers before the competition in Ljubno and the forthcoming Olympic Games in South Korea?

We will cheer for our athletes with passion and wish for them to realise the best jumps possible – great results are sure to follow.