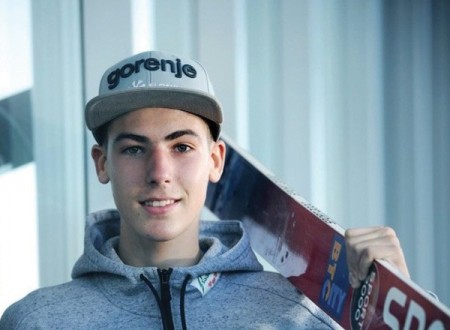 The everyday life of people of Ljubno is closely connected to ski jumping. Therefore, it is not surprising to see that SSK Ljubno BTC in Upper Savinja Valley is the training centre of one of the most promising young ski jumpers. At only 17 years of age, Timi Zajc in this season shot among the rising stars of this sport, as he in October easily beat the entire competition in the National Championship in Kranj – a huge accomplishment since all the best ski jumpers of the Slovenian national A team, headed by Peter Prevc, took part in the competition, as well. Gorazd Bertoncelj, Timi Zajc's coach, has lately noticed Timi's remarkable progress – in the position of his skis and in his mental stability that contributes to continuous quality of his jumps. Among ski jumping fans, Timi has become extremely popular and known. The up-and-coming ski jumper has joined our A-team eagles.

How did you become involved in ski jumping?

My dad, who used to jump, was my inspiration for joining the sport. When I was four years old, my dad made me a ski jump at home and later on, I joined the club where I started training.

What does winning the National Championship title mean to you?

A lot, since I did not expect to win. It is also an additional motivation for the future.

What motivates you the most at the start of the new season?

My biggest motivation is the possibility of competing in the World Cup this season. Yet, another important goal of this season is the Junior World Championships.

Do you have a role model, someone you look up to?

Since the very beginning of my career, my role model has been Gregor Schlierenzauer.

What plans do you have for this season?

For sure the World Cup competitions and the Junior World Championships.

What are your long-term plans for the future?

To compete in the Olympics and in the Four Hills Tournament.

What wishes and thoughts do you want to send to our 'Devilish Slovenians' who will soon jump on the Ljubno ski jump?

I wish for them to fly as far as possible – to a victory – on the Ljubno ski jump.