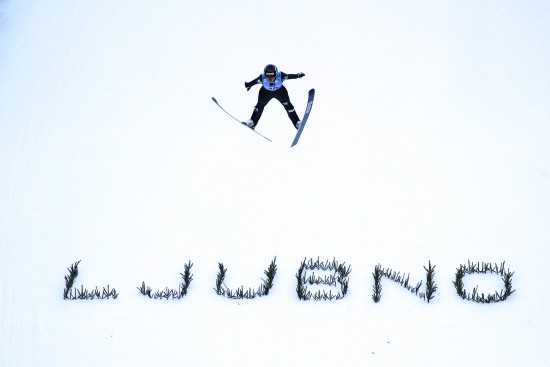 The three-day celebration of ski jumping in Ljubno ob Savinji started off with Slovenia's Katra Komar, a young competitor who successfully accomplished her task. She jumped 82 metres and was awarded 111.3 points, receiving FIS World Cup points for the third time in her career. Soon after, Jerneja Brecl jumped her personal best in Ljubno with 82.5 metres and 113.9 points, also receiving valuable World Cup points. She placed 23rd, just ahead of Komar. Špela Rogelj, cheered on loudly by the home fans, took the lead after jumping 85 metres and gathering 119.1 points. She held onto it for quite some time, and placed 14th after the first round. Going in with number 30, Urša Bogataj then produced an exceptional jump of no less than 91 metres and 130.5 points, firmly taking the lead for a considerable stretch of time and placing 4th after the first round. After her magnificent jump, the jury shortened the in-run. Nika Križnar, Slovenia's final competitor, landed at 86.5 metres and was awarded a total of 125.5 points due to some landing troubles – this was enough for a momentary 3rd place and the final 9th place after the first round. 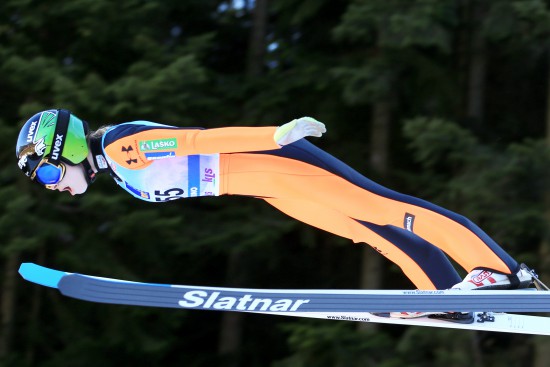 With a jump of 91.5 metres in the final round, Nika Križnar set the distance of the day (c) GEPA

In the final round, Komar improved her distance by another 2 metres, landing at 84 metres and achieving the result of her career by placing 25th with a total of 225.9 points. "I'm really glad that I could produce another fine jump in the final round. Even though the first round didn't go exactly as I wished it had, I'm quite pleased today," said the young athlete from Gorenjska after the first event in Ljubno. Right behind her, the city of Velenje's very own Brecl landed at 83.5 metres and was awarded a total of 226.7 points, placing 24th – just one spot ahead of Komar, who comes from Bohinj. "Given yesterday's training and qualifying, I'm relieved that I could get two great jumps. I'm happy and I commend the organisers on a splendid ski jump," commented Brecl after the event. Rogelj was also once again pleased with her performance after landing at 86.5 metres in the final round, gathering a total of 240.5 points, and retaining a very good 14th place. "There are no regrets, the jumps have been consistent throughout the entire weekend. I'm really happy about that, this was my goal, and I hope it continues in the coming days," said Rogelj.

Križnar with the distance of the day, Bogataj's first podium

The grand finale of the final round was opened by Križnar with the distance of the day, 91.5 metres. Križnar was visibly excited after the fantastic jump. With 257.2 points, she improved by three spots and took the final, outstanding 6th place. "I finally managed to produce one great jump in Ljubno, and I hope that the following jumps will be just as brilliant. I could be content with this placement, but I'm aiming even higher, and if I perform to the level of this jump, I have yet to be very happy here in Ljubno," said Križnar, thrilled about her performance.

Bogataj landed at 89 metres in the final round. With 262.6 points – she got a considerable amount of extra points because of the tailwind – it was clear that she would be competing for a podium placement, the first one in her career. It would arrive with the very next jump. Althaus landed at 88 metres and 260.9 points, falling behind the Slovenian ski jumper, and the celebration could begin! On her very first podium, Bogataj placed 3rd. Only Takanashi, with 263.7 points and 88.5 metres in the final round, and Lundby, with 90.5 metres and 168.9 points, could beat her underneath the Rajhovka peak. This was Lundby's sixth consecutive win. "I've wanted it for quite some time now, and I'm happy that I've finally got it. It truly is special, my family is here, my closest friends, this is the most wonderful thing in the world," said Bogataj, unable to conceal her happiness after stepping onto the podium for the first time in her career. 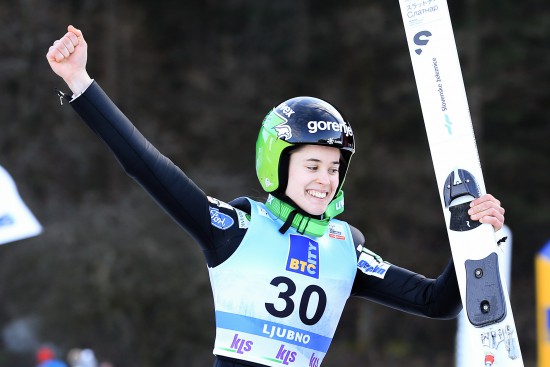 Needless to say, after another podium placement, the third one this season in the category of individual events, head coach Zoran Zupančič was more than pleased: "We are super happy with these results. For the first time today after a long while, I had tears in my eyes. I'm very happy that the entire team has succeeded, that Urša managed to get two very good jumps. She's been waiting for her first podium for too long, and I think she was the most deserving among those who undoubtedly deserved it. Nika has been very close to it as well, and I think that once she can accomplish two such jumps as the final one, she'll get there. Two among the top six and another three with World Cup points, that's amazing!"

Tomorrow, Ljubno will host the team competition. Slovenia will be represented by Bogataj, Križnar, Rogelj, and Brecl. One more individual event will take place on Sunday.